“Matthew was a critical member of the team in developing the cultural atlas app,” said Doug Patinka, interim chief information officer at the Department of Cultural Affairs and Gallegos’ mentor. “His involvement ranged from project planning, database development and website programming to photography and training partners in using the content management system for the app.”

Patinka said the cultural atlas mobile app allows people to discover places of cultural interest to them throughout New Mexico, with more than 800 photos, a New Mexico map integrated with the user’s phone-mapping software, and written highlights of the sites. 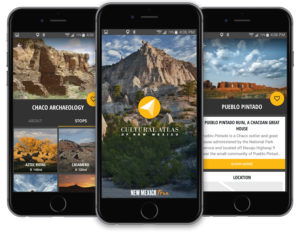 “As an example, if someone is at the Georgia O’Keeffe Museum in Santa Fe they can open the app and find all the nearby museums like the New Mexico Museum of Art,” Patinka said.

He said the app aims to increase visitors to the New Mexico sites. The app is available as a free download on Google Play and the Apple App Store. Or visit www.nmculture.org and use the cultural atlas link. The app is compatible with Apple and Android devices.

“The database I created for the app has the dual purpose of holding all the content for the app and providing an archive that the DCA staff can use to update the content,” Gallegos said.

Gallegos also photographed some sites for the app like Ft. Union National Monument, City of Las Vegas Museum, and the Dwan Light Sanctuary at the United World College – USA north of Las Vegas.

He said that as a New Mexico native, the most interesting element of the app project was learning about the cultural sites he never knew existed in the state.

“Our state is so rich and diverse in its history, culture and natural wonders. It was a real privilege to work on this project to make this information about New Mexico so easy to access,” Gallegos said.

Gallegos used his knowledge of computer coding, data organization, and web development to build the database for the app. As an undergraduate at Highlands, he earned a B.A. in media arts and a B.S. in computer science in 2011. Gallegos made the dean’s list every year.

“Matthew’s blend of media arts and computer science expertise made him a perfect fit for this cultural atlas app project and other technology projects he developed as a DCA intern like an online catalogue of the Museum of New Mexico Press,” Patinka said. “I’ve had six or seven Highlands media arts interns. I’m always impressed with their skills and how they apply their knowledge to create innovate multimedia projects in a museum setting.”