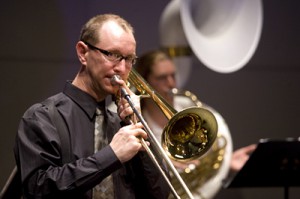 The Highlands University Jazz Ensemble will be performing in concert on Thursday, Dec. 2, at 6 p.m. at Ilfeld Auditorium. The concert is free, and attendees will be required to wear masks.

Edward Harrington, professor of music technology and education, said the jazz ensemble is composed of students, faculty, and community members. He said the composition of the ensemble varies from semester to semester based on the instruments students are interested in playing.

“We have a really nice saxophone section this semester,” said Harrington. “And for this concert, in the rhythm section it’s me on bass and Kevin Zoernig on piano.”

The jazz concert will feature approximately 20 songs, including a few vocal performances.

“We have a nice vocal quintet. One of the arrangements we have in our jazz library is a four-part vocal choir, so it just worked out that one of our students was able to put together a quintet where they’re doubling one of the parts,” said Harrington. “So, that’s a new thing that has never really been done as long as I’ve been here.”

Some of the songs that will be featured in the concert include ‘Just Friends,’ ‘Night Train,’ ‘Skating in Central Park,’ ‘Oye Como Va,’ and ‘Dream a Little Dream of Me.’ Featured vocalists include Chantel Mullen, Marshall Moore, Jordan Jones, Justin Lovato, and André García-Nuthmann.

“One of the songs is going to be ‘Just a Closer Walk with Thee,’ and that’s a jazz standard that has a tradition from New Orleans-style music,” said Harrington. “I’m going to be playing tuba on that instead of bass, so that’ll be fun for me.”

According to Harrington, several of the songs in the concert will be unique arrangements composed by Zoernig and the rest of the arrangements will be from jazz ensemble scores. Harrington said he’s looking forward to performing live for an audience again.

“In the past we’ve had tremendous following and groupies of all ages and all genders,” said Harrington.  “People have been missing our shows and we’ve been missing the performances as well. So, this should be really good.”