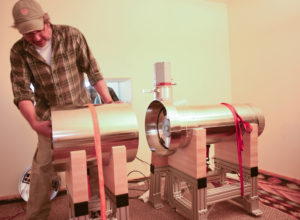 Las Vegas, New Mexico – A new geologic research instrument at New Mexico Highlands University will open up opportunities for student research that will advance knowledge across the science disciplines of geology, chemistry and physics.

Thanks to a $550,000 grant from the National Science Foundation, Highlands has added a superconducting rock magnetometer to its state-of-the-art Paleomagnetic – Rock Magnetic Laboratory, the only research lab of its kind in New Mexico, Southern Colorado, Western Texas or Arizona.

“This exciting new tool gives us the capability to investigate new studies in magnetic properties, ancient climate, synthetic molecules, and why some materials are magnetic, and others are not,” says Highlands geology professor Michael Petronis. “We can expand our volcanology studies that shed light on the growth of ancient volcanoes here in New Mexico as well as international locations such as the Czech Republic. This new knowledge has implications for better understanding active volcanoes worldwide.”

Paleomagnetism studies the history of the earth’s magnetic fields recorded in rocks, explains Petronis, with another important application being pressing environmental concerns like climate change.

The newest tool in the lab’s arsenal is a magnetically shielded cylinder-shaped measurement chamber cooled to superconducting temperatures of minus 450 degrees Fahrenheit – minus 269 Celsius – which allows for measurement of extremely weak magnetic fields.

“This cutting-edge instrument allows us to measure extremely weak magnetic fields far beyond what was previously obtainable,” he says. “It is more than a thousand times more sensitive than the previous instruments at the lab and is also fully automated – allowing for dramatically faster analysis of a broader array of samples.”

Petronis is pleased with the opportunities the magnetometer offers. “This new instrument in our paleomagnetic lab makes our research facilities on par with Tier I research institutions like Cal Tech, MIT, Yale and Berkeley,” he says, adding that Highlands is offering its students world-class research opportunities in the paleomagnetic lab that help prepare them for advanced academic studies and high-paying careers in the science fields.

“The research our Highlands students conduct is transformative in their development as scientists. It has also helped them land positions with employers like Los Alamos National Laboratory, NASA, the Office of the State Engineer, and environmental consulting firms,” Petronis says.

Sindy Lauricella, a 24-year-old Highlands geology graduate student from Taos, New Mexico, was part of a Highlands research team that investigated extinct volcanoes in the Czech Republic in the summer of 2018.

“My master’s thesis is about volcanology and paleomagnetics, the study of ancient magnetic fields in the Krasny Vrch volcano in the Czech Republic,” says Lauricella. “This new instrument in the paleomagnetic lab is very exciting because with the automation, I can analyze my rock samples much more quickly and determine the changes in the magnetic field directions. This new data will help us understand the growth of this volcano for the first time.”

Lauricella, who is the first in her family to graduate from college, says her research experience in the Czech Republic helped her grow immensely as a scientist because she was working on her own research under Petronis’ supervision.

Since 2009, Petronis and his students have used the paleomagnetic lab for 42 research studies published in scholarly journals such as the Journal of Geophysical Research, Nature and Bulletin of Volcanology. Petronis and Lindline’s students were lead authors on 18 of these studies.

Petronis says that another benefit of Highlands University’s paleomagnetic research capacity is the national and international research collaboration it fosters.

“We are already collaborating on research projects with more than 10 universities, in five countries, involving more than 20 faculty and their students,” Petronis says, adding, “With this new instrument, I expect more research partnerships. These partnerships raise the profile of Highlands in the global geologic research community and build our students’ global competency,” Petronis said.

Since 2008, the NSF and other federal agencies have awarded more than $2 million in grants for the Highlands Paleomagnetic ­– Rock Magnetic Laboratory, which Petronis directs. He wrote some of the grants alone and co-wrote others with fellow Highlands geology professor Jennifer Lindline.