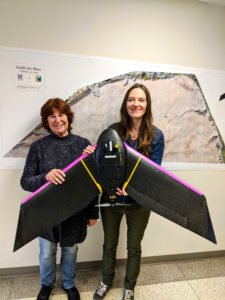 Highlands anthropology faculty member Vick Evans, left, and Katie Withnall of the New Mexico Forest and Watershed Restoration Institute hold a NMFWRI drone that was used to help develop the first aerial maps of a prehistoric Navajo site. Behind them is one of the geographic information system (GIS) site maps Withnall developed for the project. Image courtesy of NMFWRI

Highlands worked with the Navajo National Heritage and Historic Preservation Department on the project in October, with the New Mexico Forest and Watershed Restoration Institute and DesertGate Internet Services of Las Vegas, New Mexico providing the drone equipment and expertise.

“The data from the drones give us an incredibly detailed bird’s-eye view of these archaeological sites,” said Vick Evans, the anthropology faculty member who coordinated the project. “We will send all the data to the Navajo National Heritage and Historic Preservation Department and keep a copy here in the Anthropology Laboratory at Highlands.”

In May 2019, the Highlands University anthropology program and its students were the first to do a ground survey of the same prehistoric Anasazi Pueblo during a field school that was a partnership with the Navajo National Heritage and Historic Preservation Department.

“The site is an Anasazi Pueblo dating approximately from the 5th to 14th centuries based upon the pottery sherds we found. There were also signs of agricultural field houses and a large ceremonial kiva up on a hillside,” said Evans, who led the field school.

Jeremy Begay, a Navajo who has been a cultural resource management archaeologist for 15 years, represented the Navajo National Heritage and Historic Preservation Department on both the Highlands field school and drone project. He is also an environmental science graduate student at Highlands.

“The aerial video gives us information on things we couldn’t see on the ground such as the overall site layout of this prehistoric Anasazi Pueblo,” Begay said. “The video and maps are important for preservation and the future land management of the area.”

Begay said the research partnership with Highlands is one of the first partnerships undertaken on the Navajo Nation with a university.

Katie Withnall of the New Mexico Forest and Watershed Restoration Institute, which is housed at Highlands, used one of the institute’s drones to get aerial footage of the site and then develop site maps.

“We used a very precise fixed-wing mapping drone called Sensefly eBeeX, capable of flying for an hour at a time, much longer than most drones,” Withnall said. “Our drone has a 3-D camera that provides very high-resolution images.”

“Then I used a specialized software to mosaic the photos into one large site map. The digital map reveals the surface terrain of the archaeological features,” Withnall said.

“We worked with Highlands on this drone project because it was an amazing opportunity to help document this historical site for the first time with aerial video footage,” Alarid said.

“We can’t thank the New Mexico Forest and Watershed Restoration Institute and DesertGate enough for their generosity in operating the drone equipment for this project and providing outstanding maps and video,” Evans said.

Evans said she and Begay will present the findings of the drone archaeological survey project at the Southwest Symposium in Tempe, Arizona in January 2020.

Evans said plans are underway to work with Begay and the Navajo Nation on another Highlands anthropology field school in summer 2020 at the same Anasazi Pueblo site in New Mexico. For more information, contact Evans at vrevans@nmhu.edu